Over 600 participants from near and far signed up to run or walk from Gibsons to Davis Bay on Sunday, April 12th, for the 38th annual Sunshine Coast April Fool's Run. Eighty percent of entrants travelled from off-Coast to descend on Gibsons for this popular spring half-marathon, which had its closest finish ever with only one tenth of a second separating first from second.

After 21km, victory was decided in a full-out, no-holds-barred sprint to the line between Roberts Creek's Shaun Stephens-Whale and Japan's Takanori 'Tsunami' Haraguchi. Stephens-Whale edged ahead by centimetres to win the 2015 Sunshine Coast April Fool's Run in a personal best 1:10:15. Lisa Brooking of Langley took the women's title for the third time, well ahead of her nearest rivals in 1:18:42, several minutes faster than her previous best on this course. 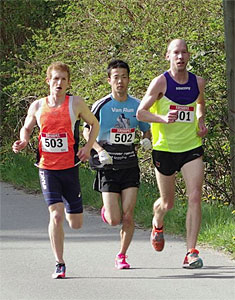 Stephens-Whale, Haraguchi and Jackson in the early km's

Stephens-Whale went into the race with the modest goal of keeping up with defending champion David Jackson of Abbotsford for as long as possible. He wanted to test his fitness level before the TC10k in Victoria at the end of the month, but also to hone his competitive edge. He even went so far as to ditch his watch at the starting line so he could focus on racing rather than pacing. Read Shaun's personal account here

The trio of Stephens-Whale, Haraguchi and Jackson soon left the rest of the field in their wake and cruised through the first 15km together. Stephens-Whale was slightly surprised to find himself leading the way through the roads of Roberts Creek, which he knows intimately. “On countless occasions the prospect of leading the Fools Run would creep into my mind and would provide motivation when battling a head wind or when pushing up on one of the many cruel hills,” he recalled. Now it was happening for real.

Just after passing the aid station managed by Shaun's parents in front of the family home, Haraguchi made a move. As they powered up the infamous Marlene Road hill, Stephens-Whale stuck to his heels with Jackson hanging on at the back. After they crested the hill and turned west onto the highway, Jackson lost contact while Haraguchi continued to push the pace. 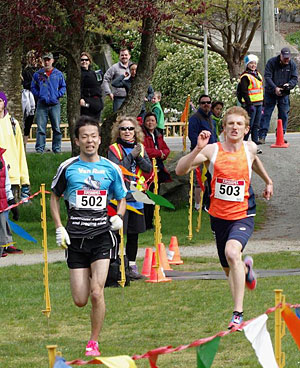 Haraguchi and Stephens-Whale sprint to the line

Concerned that Jackson might still come back, Stephens-Whale surged ahead into the lead once again, as they headed past the provincial park and flew down Rat Portage Hill. “At 20km I knew it would come down to a kick, so I eased back slightly,” he said. Haraguchi regained the lead with 400m to go and they entered Mission Point Park with the Japanese runner still slightly ahead.

Both started sprinting with every ounce of energy, neither one letting up for a moment. As they approached the line it could have been anyone's race, but in the end Stephens-Whale leaned past Haraguchi for a 0.1 second advantage. The 1:10:15 clocking was a two minute personal best for Stephens-Whale, who set his previous best on this course in 2012. He was of course also the first local male, adding a pair of Saucony shoes to his $300 cash winnings.

“Winning the April Fool's Run is a dream,” said Stephens-Whale. “I'm so happy to have achieved it. I have raced across the world but this race, this course, these people are truly extraordinary.”

“I was a bit disappointed I didn't win today,” said Haraguchi, who has been living and training in Vancouver since last September, and is preparing for the BMO Vancouver Marathon on May 3. “Since I train by myself, I use races as hard training.” Haraguchi admits he was still tired from Rock 'n Roll San Francisco two weeks ago, so he started conservatively through the first miles in Gibsons, but still wanted to win. “This result bodes well for BMO [Vancouver Marathon]. I am trying hard to get back to the level I was at before my injury in 2012.” Haraguchi will be moving back to Japan next month, then to Australia. His goal is to be a travelling runner/journalist, racing and reporting on marathons from around the world.

Langley's Lisa Brooking decided to enter only a few days earlier, but made the trip worth her while with another victory and the $300 cash prize. Her dominance was never in question as she led the women's field in 7th position overall. “I went into the race with an open mind,” she said. “My goal was to race smart, and I felt I did that.” She started out conservatively for the first 5km then progressively picked up the pace. “The most relaxed half marathon I've ever run!” she noted.

Brooking was well pleased with her 1:18:42 clocking, her fastest time on this course by several minutes, and only a minute off her half marathon personal best. This was her third victory at the Fool's Run since 2012. “Thank you for encouraging me to dust off my racing shoes and step up to the line. I'm so happy to kick off my season with a win,” she said.

Vancouver's Kristin Smart, who was unknowingly on the verge of coming down with flu, took silver to Brooking for the second time in 1:26:09. She was followed by VFAC teammate Helen Ritchie, who was also the top female Master 40+, clocking 1:27:33. “While I was hoping for a faster time, I felt like I put in a good effort,” said Ritchie, who is also preparing for the BMO Vancouver Marathon.

Second female master spot was claimed by Margreet Dietz of Squamish, with another VFAC member Mary Walsh rounding out the Masters top three.

The men's masters competition was topped by Squamish's James Newby in 1:22:16, followed by Robert Durrant of Langley and Paul Lancaster of Vancouver.

Top local woman was Sechelt's Tammy Dean, who was second last year in this category to record-holder Kim Doerksen. Dean, who also helps with the organization of this event, set a new personal best of 1:39:16, less than a minute ahead of second fastest local woman Katherine McGillivray of Roberts Creek. “What a great way to run my final April Fool's Run,” said Dean, who will be moving to Italy later this year. “For the first time in years, I had consistent training, no injuries and a game plan that paid off!” And now, a new pair of Saucony shoes to train in.

The relay division was very popular again this year, with nearly forty teams registered to split the distance into two or four parts. Top relay overall and in the 4-person division was 'Punjab Running Club' from Surrey, in 1:26:34. Club-mates 'Punjab Running Club 4' were the second overall team and first in the 2-person division, followed by a mixed team from Chatelech Secondary, 'Better Than Elliot and Liam' (some friendly inter-team rivalry going on).

VFAC continued their monopoly of the running club division with another first place in the Club/Team Challenge, followed by Lions Gate Road Runners. The recreational division was won by a 16-person team 'Lauff With Me', while new sponsor City Transfer took the corporate category prize.

Entrants in the costume contest were voted by audience applause. At first it was close between 'The Knights of Crampalot' (William Stevenson and Teddy Williams), a local 2-person relay team dressed as medieval knights, and 'The King of Fools' (Luc Isaak) in royal jester garb, but round two put the Knights clearly ahead in popularity to win the $50 gift card from Running Room. Runners-up included Minnie Mouse (2014 winner as 'Cleopatra') and a Tropical Flower Girl. 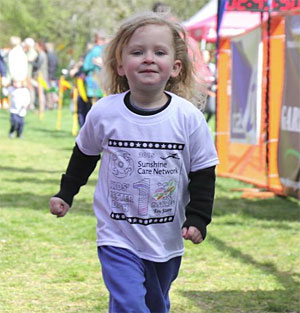 The Sunshine Care Network Kids Jester Dash presented by Pastimes went off at noon, with fifty mini-runners from ages 1 to 7 galloping around the park and through the official finish line, proudly wearing t-shirts they coloured and decorated themselves in the activity tent. They each received souvenir sunglasses from BMO, a toy from Pastimes, and a colouring book or LED light from the Tom Spirit 'Live Life to the Fullest' initiative, in memory of Thomas Bennett.

Thanks to generous donations by participants, $1000 in cash plus two boxes of food were collected for the Sunshine Coast Food Bank.

Full results, photos and video can be found at foolsrun.com. Coast TV Sports will be airing a 30 minute show in the coming weeks. 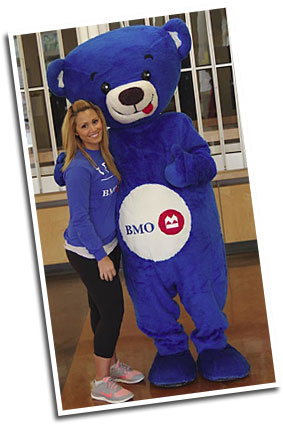