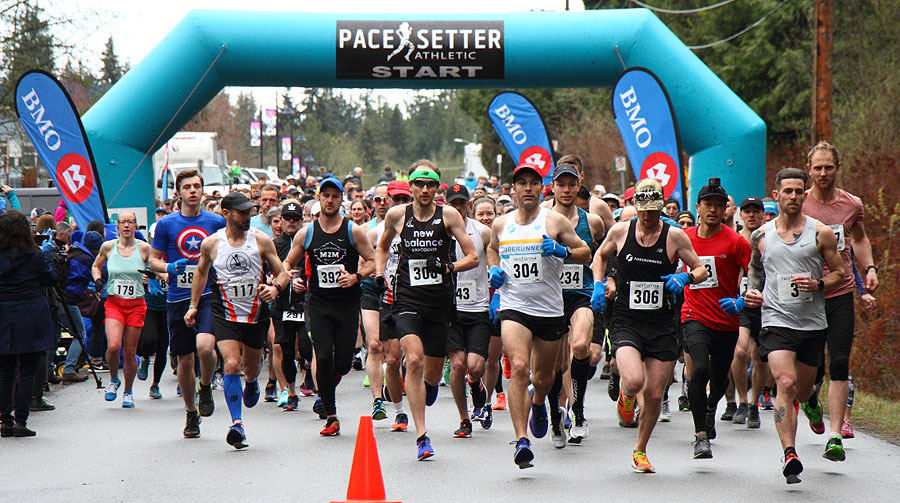 April 7, 2019, Gibsons to Sechelt, BC — The 42nd BMO Sunshine Coast April Fool’s Run presented by Eastlink provided near-perfect racing conditions for the nearly 600 participants who ran, walked and relayed their way from Gibsons to Sechelt on Sunday. A pair of Vancouver runners took the top spots: Chris Napier with a personal best of 1:13:50 and Kendal Paul in 1:26:05. Neither has won at this event before.

Once again the weather gods smiled upon the participants and organizers. A rainy forecast changed to “a few showers” and by the morning even those did not materialize. There was no wind to hamper the runners’ efforts, and sunshine at the finish line was the icing on the cake.

The early start, with approximately 40 walkers and walk-runners, went off at 8:17am with the main start getting underway at 9:17am. Included in the mix were 126 relay runners who shared the distance among 2 or 4 teammates.

Surrey’s Drew Nicholson took an early lead, followed by 2018 first local male Nick Duff of Sechelt. Napier, who planned to run his own race at marathon pace (he is training for BMO Vancouver Marathon), found himself in third place after a few kilometres. He soon passed Duff, who had gone out hard, then caught and passed Nicholson heading down Cemetery Hill on Lower Road, moving 50 metres into the lead. “I actually didn’t mean to pass him, but I know from running this course previously that you need to attack the downhill sections and avoid braking, or your quads will be destroyed in the second half of the race,” said Napier. “[Nicholson] was braking a lot on the downhills and then powering up the uphills, so I used this to my advantage in the rest of the race.” 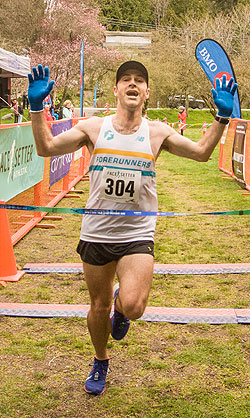 Napier realized if he could hold the lead until the top of the infamous Marlene Road hill, he could win the race. Nicholson manage to get close at the top, but Napier put in a surge on the slight downhill after turning onto the highway, leaving his rival behind once and for all. “I knew I had the win at that point and I focused on my time, which I realized could be a personal best (PB) if I kept pushing the pace,” noted Napier. He also took the top Masters (40+ years) prize.

“The Fool’s Run is always one of my favourite courses to run,” admitted Napier. “I love the fact that you can’t settle into a rhythm at any point on the course and you constantly have to assess your effort.”

He was surprised how strong he felt throughout the race. “I didn’t think I was in shape for a PB and haven’t had the greatest training over the last couple of months. I am also just coming back after taking almost two years off of training and racing to focus on my PhD.”

Nicholson easily held onto second overall in 1:14:56. Behind him, a battle for top local male was taking place. Duff was still in third overall at the halfway point, with a 25 second lead over Gibsons’ Jordan Maynard. Duff’s fast start took its toll and Maynard made up the gap, but Duff wasn’t giving up easily. Maynard prevailed to take third overall and first local in 1:18:29, just four seconds ahead of Duff.

The contest for top female spot was less dramatic. Kendal Paul was leading for most of the way, except for a brief sojourn near the 10k mark where North Vancouver’s Allison Ezzat (2nd here in 2018) moved slightly ahead. “I asked [Ezzat] if she was doing the relay and she said she was doing the full thing so I thought I better pick up my pace if I wanted to win!” said Paul. She did just that, and arrived at the finish line unchallenged in 1:26:05.

Paul’s story leading up to this victory has similarities to that of course record holder Kimberley Doerksen. After years of sluggish running, Paul found out last fall that she was anaemic. She sorted that out only to get injured in January. After a return to running in late February, her expectations were pretty low for the Fool’s Run. “I was overjoyed that I managed to have an energetic and pain free race.... and win — which has never happened before,” said Paul.

As a first time Fool’s Run participant, Paul found the course beautiful and challenging. “The challenging bits were made easier by the smiling volunteers and spectators every step of the way,” she noted. “I also found that having the relay groups injected a lot of energy into the race. There were some really speedy runners doing the relay and that kept the rest of us motivated throughout.”

Ezzat repeated her second overall placing from last year, crossing the line less than a minute behind Paul. Rounding out the women’s podium was infrequent racer Carlin Goos of Gibsons. Her 1:28:35 finish was also good for top female Masters and Top Local female honours.

The fastest relay team overall in 1:33:27 was a 2-person team, “Fitz and Muckz”, consisting of Sarah Fitzmaurice and Mike Willms from Vancouver. Next up in 1:36:39 was a 4-person women’s team from Elphinstone Secondary track team, “Scrambled Legs”, made up of Mari Nelson, Sacha Stipec, Eilis Mackenzie, and Kallalei Ryden. “Team Shoreside 2” from Sechelt rounded out the top 3 relays overall with Kai Jenkins, Kristin Jenkins, Courtney Kohuch and Dawn Moscrip sharing the half marathon distance in 1:39:36.

Finish line festivities included the popular Home Healthcare Network Kids Jester Dash presented by Pastimes, which filled up several weeks in advance. Fifty children age 7 and under enjoyed crafts and a warm-up at the activity tent before sprinting around the park and through the official finish line to receive a medal. Each mini racer also received a t-shirt, a toy from Pastimes and souvenirs from BMO.

The costume contest was won this year by Liam Watson of Surrey, who managed to place second in the M20-29 division (1:31:00) while wearing a Barney the dinosaur suit.

The organizers would like to thank the participants, the sponsors, and especially the incredible team of volunteers who made the event possible.

Tune in to Coast Cable/Eastlink for coverage of this year’s race, to be aired during April. For full results and photos, see links at the top of this page. Registration for the 2020 edition will open on Monday April 15.

Next up on the local road racing scene is the second annual Sunshine Coast Brewery Run Series, starting on Father’s Day June 16 with a 5k from Persephone Brewing. Visit pacesetterathletic.club for more information. 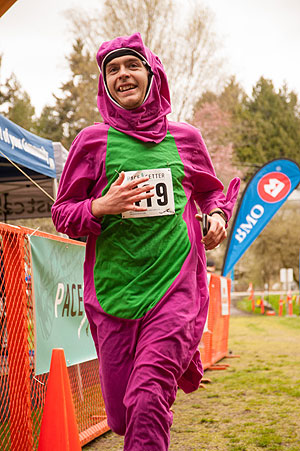