Check our Facebook gallery for many race photos and videos 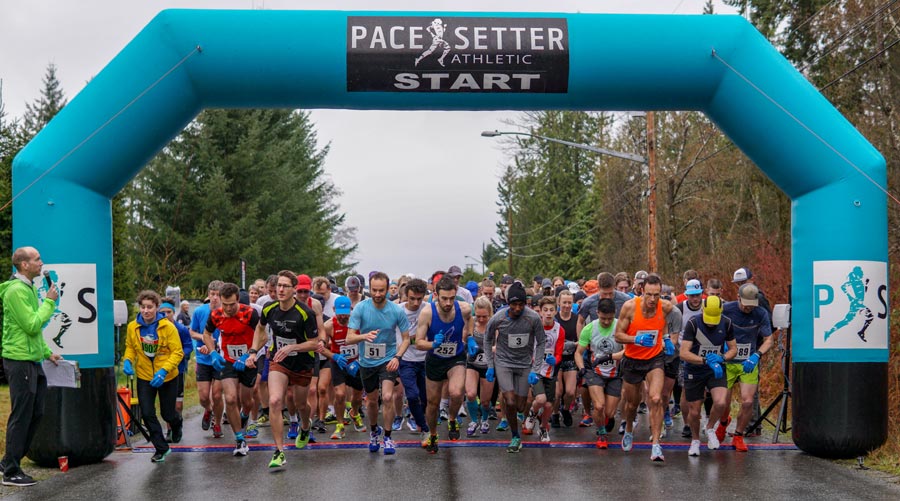 April 8, 2018, Gibsons to Sechelt, BC — The 41st annual BMO Sunshine Coast April Fool’s Run presented by Coast Cable attracted nearly 620 registrants from all over BC and beyond, to run and walk from the Gibsons and Area Community Centre to Mission Point Park in Davis Bay. Fifty kids age 7 and under enthusiastically sprinted around the park in the Home Healthcare Network Jester Dash presented by Pastimes, and $1600 was collected for the Food Bank.

Contradicting dire forecasts of heavy rain all weekend, a light drizzle cooled the participants at the start but soon dried up, with an ideal racing temperature of eight degrees. Clouds gave way to sunshine in Davis Bay by the time most had reached the finish, warming slightly but still perfect for running.

Leading the way were Benard Cheruiyot Koske of Kenya and Paul McNamara of Vancouver, who ran neck and neck until the very end, where Koske sprinted the final 30m in the park to win by 1 second in 1:13:46. Rounding out the podium was Vancouver’s James Lamers in 1:15:25. 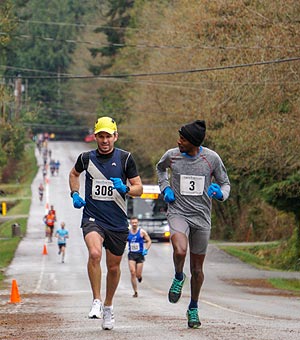 Koske, McNamara and Lamers stayed together through a fast first 3km, then Lamers started to fall back heading up King Road near the 4km mark. Koske took a slight lead but kept turning around to encourage McNamara to catch up to him. By time the duo were back on the highway they had separated themselves from the rest of the field.

“We chatted for the next few km’s and I learned his [Koske’s] personal best is 64 mins, and I told him what kind of terrain to expect as the race progressed,” recalls McNamara. “Obviously he is a much stronger runner than me but I knew the hill coming out of Roberts Creek would test him. He was happy to have someone to run with and so was I.”

After the Marlene Road hill, conversation dropped off as the duo focused on the last few kilometres of the race. McNamara kept pushing while Koske was happy to go along for the ride. At 20k there was still no move from Koske.

With 400m to go, McNamara knew he had to take the lead over the bridge to have any chance of winning. On the final turn into the park, he tried to accelerate off the slight downhill, and gave it everything he had. But it wasn’t enough — Koske breezed by with 30m to go and took the victory.

“It was great to run with Benard and congrats to him on a great win. I was happy to make him earn the victory!” said McNamara. 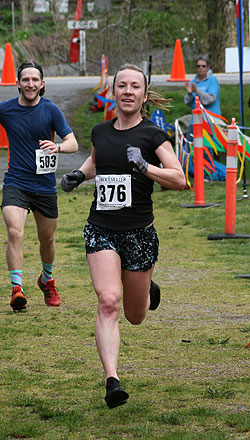 The results of the women’s race were unexpected, as neither of the top two had applied for elite entry into the event. The only elite women’s entry was Kristin Smart of Cobble Hill, who has placed second two times here in the past. Yet Vancouver’s Laurel Richardson had the strongest run on the day with a 1:24:56 clocking, followed by North Vancouver’s Allison Ezzat in 1:26:49. Smart took third in 1:28:25.

Richardson took an early lead with Smart chasing and Ezzat in third. “I was trying to keep Laurel in sight and kept hoping I might catch her on the uphills, but my legs absolutely died on me around 15-16km!” said Smart. “Allison [Ezzat] passed me right around there too — I didn't realize she had been so close and I just had nothing left to hang on!”

Ezzat was really happy with her race. “This was my at least my 3rd or 4th time running it and I took over 3 minutes off my previous best Fool’s half, as well as a new half marathon personal best by 10 seconds!” she reported.

The winners of the masters 40+ division were Stephen Havas of Vancouver in a speedy 1:16:27, and multi-time winner Margreet Dietz of Squamish in 1:30:12. 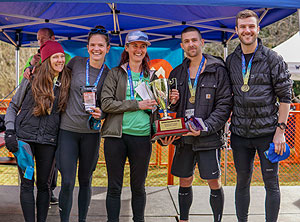 Katherine McGillivray of Roberts Creek was not only the first local female for the 3rd year in a row, she was also third female master overall and 4th local finisher overall in 1:35:28. Top local male was Nick Duffield of Sechelt in 1:23:28.

For full results, photos and video, check out the top of this page, and watch Coast Cable for a 30 minute show to be aired multiple times in the coming month starting April 12.

Registration for 2019 opens April 12 at foolsrun.com — sign up early to get the Super Saver Discount available to the first 100 people to register. 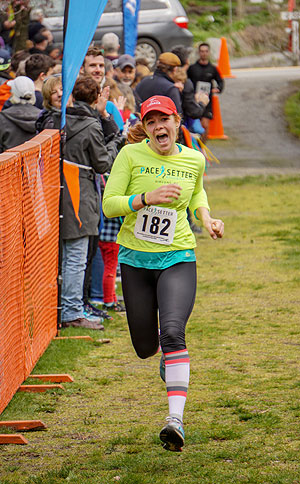