April 2, Gibsons, BC — The 2017 Sunshine Coast April Fool's Run presented by Coast Cable was the largest in the event's long-running history. A total of 651 runners, walkers and relay team members registered for the 40th edition of the half marathon, surpassing the previous all-time high of 641 set several years ago.

Donations to the Sechelt Food Bank totalled nearly $1800, and the event chipped in another $200 and change to make it an even $2000. "It's fantastic that so many race participants choose to make a donation to our local food bank," said co-organizer Teresa Nightingale. "Especially considering most of them don't even live here!" 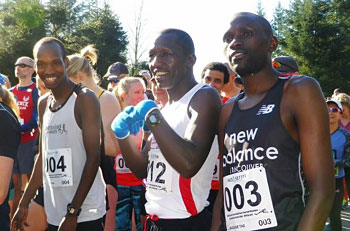 The calibre of competition was ramped up this year with last-minute entries by four Kenyan athletes, all first-time visitors to the Sunshine Coast. Paul Kimugul, Leornard Kipkoech, Benard Ngeno and Jane Murage are currently being billeted in the Surrey/White Rock area for the spring racing circuit (Vancouver Sun Run, TC10K, BMO Vancouver Marathon, and others). They travelled over to the Sunshine Coast on Saturday and were hosted by local runners.

Spring seemed to have finally arrived just in time for race weekend. The bright sunshine put everyone in high spirits for the 9:17am start on Park Road.

Through the Gibsons portion of the course, the lead pack consisted of four men: Kimugul, Kipkoech and Ngeno, and Roberts Creek's own Shaun Stephens-Whale, who won here two years ago in 1:10:15.

The pack didn’t last very long. By 6km Ngeno had to drop out due to a tight hamstring. Kimugul threw in a surge that Kipkoech couldn’t match. Stephens-Whale could have kept up but made the decision to let Kimugul go, doubting his own fitness.

“Once we got to Lower Road I started opening it up and the gap maintained for a long time at around 30 seconds,” said Stephens-Whale. “In retrospect, considering the headwind, it probably would have been wise to have jumped into [Kimugul’s] draft... but I was a bit intimidated by his credentials. I was definitely pumped up by all the support during the race!” 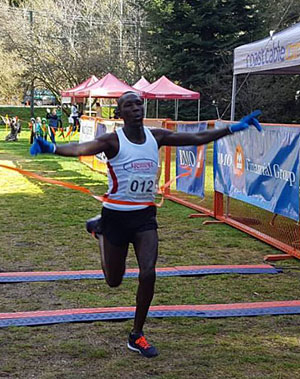 Kimugul went on to win by over a minute over Stephens-Whale, earning $300 cash thanks to title sponsor BMO Bank of Montreal. "After 6k I had to run on my own, but it was really nice," said Kimugul. "The course is a bit hard going downhill. Going up was okay and finishing was very good."

Meanwhile, Kipkoech ran alone in third place until his legs felt the effect of the Marlene Road hill at 15k and he started to cramp up. He was eventually overtaken by six competitors, four of whom were in a back-and-forth battle for the final podium position.

Doug Abbot of Port McNeill prevailed over Lower Mainlanders Paul McNamara, Jeremy Hopwood and Drew Nicholson, moving into 3rd place only in the final 400m sprint to finish in 1:16:50. “I loved the event,” said Abbot. “No two kilometres were the same. I will definitely be recommending this race to everyone I know and will likely be back next year.”

The women's lead pack stayed together much longer than the men's did. Murage, Kate Gustafson of Vancouver and course record holder Kimberley Doerksen of Gibsons (now living in Vancouver) ran together for 14 kilometres before anyone made a move. 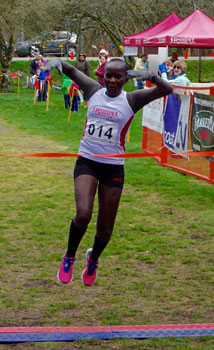 Then Gustafson and Doerksen were dropped by Murage on the infamous Marlene Road hill. The Kenyan, who placed second last Sunday at Hamilton's Around The Bay Road Race 30k, pulled ahead and held on to win in 1:19:18.

"The course was a little bit challenging because of many hills but we challenged those hills until the end," said winner Murage, who also received $300 for her efforts. "I enjoyed running them. I would also like to congratulate the second and third ladies."

Gustafson gamely held chase but ended up 18 seconds back for second place. Doerksen was well pleased with third place in 1:20:52, after admitting pre-race that she would be happy with anything under 1:25 at this point.

"It was a great benchmark to build from going into the road season," said Doerksen, who won the BMO Vancouver Marathon in 2015. "There are too many positives to mention: the sun shining; friends and family cheering along the course (our community is the best!); the camaraderie displayed by Jane [Murage] and Kate [Gustafson] throughout the race who encouraged me to stay with them; running the Jester Dash with my nephew... I could go on and on. But that's why this race has been on for 40 years. There's a strong community, the scenery is spectacular, and organization is great and the costumes are ridiculous. I'll be training my nephew to get his name on the First Local trophy!"

In the men's masters 40+ category, Vancouver's Mark Bennett and White Rock's Chris Barth had a great battle for 1st, with the more senior Bennett prevailing in 1:18:50 to Barth's 1:18:55.

“It was good running with Chris,” said Bennett. “We got a chance to chat while keeping a steady pace. Somewhere around 8 or 9k I pulled ahead by couple of stride lengths — I don’t think Chris was ever more than 15 seconds behind.”

After the Marlene Road hill Bennett just focused on staying ahead of Barth and finishing strongly. But Barth didn’t let up for a second. "I dug so deep that I actually got sick after crossing the finish line trying to catch Mark and break 1:19!" said Barth. "Things are looking up since hip surgery last year."

Rounding out the top 3 masters was James Newby from Garibaldi Highlands in 1:22:50.

The women's masters division was dominated by Vancouver's Tania Tasaka in 1:31:17, four minutes ahead of her peers.

Second master was Roberts Creek's Katherine McGillivray. “My favourite part was flying down Lower Road, past my house where friends and family were out cheering,” said McGillivray. She struggled with the wind in the final kilometres, but “left it all on the course” to set a new personal best.

Squamish's Margreet Dietz, who was the first master female in 2016, had to settle for third this time. "It was my toughest Fool’s Run yet," said Dietz. "Unfortunately it seemed that my body had not recovered as well as I had thought from a recent flu."

The local women's top three was a repeat of 2016, with McGillivray first in 1:35:16, followed by Kathleen Clove and Anna Hume, spread out over nearly 15 minutes. 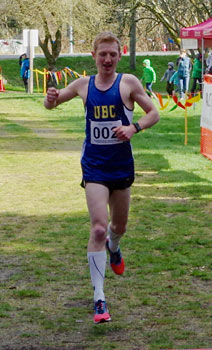 Stephens-Whale and McGillivray, besides winning a pair of Brooks shoes, will have their names added to the George Matthews Memorial Award. The trophy was upgraded this year to replicate the original Coast News Challenge Cup that was given permanently to 3-peat winner Glen Chilton in 1987.

This year saw the biggest number of entries to date in the relay division. Forty-five teams of 2 or 4 ran consecutive portions of the course with humourous team names such as "Cirque de Sore Legs", "HILL Is A Four-Letter Word", and "Team Reluctant". The fastest relay was the 4-person team "Shire" from Halfmoon Bay, in 1:31:20, while the top 2-person team was "Not Two Matts" (Gibsons) in 1:45:05.

The Group Challenge was won by Lions Gate Road Runners in the club category, and Acetamarathon in the Recreational category.

For the 40th edition celebrations, the costume contest theme was the 1970's. There were a number of creative outfits seen on course, but the winner by applause was the family relay team "Little and Big Runners", with authentic retro clothing, wigs and headbands, looking like they stepped right out of 1978.

Thanks to a gold-level sponsorship by Hapi Foods, all award winners this year received Holy Crap cereal products in addition to awards from Running Room, PaceSetter Athletic, and Brooks, and cash prizing from BMO.

Presenting Sponsor Coast Cable's coverage of this year's race will be aired on Coast Magazine April 6th, 8th and 10th at 6:30pm.

Registration for the 2018 April Fool's Run is opening this week. The first 100 entrants get in for just $25. Race date will be Sunday, April 8th (Easter is on April 1st in 2018). See foolsrun.com for details and to sign up. 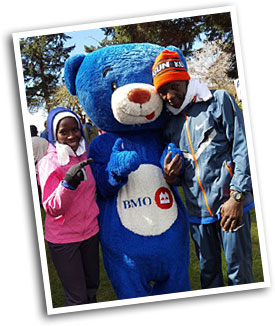