Gibsons, BC — The 39th edition of the Sunshine Coast April Fool's Run was held on April 3rd under perfect racing conditions following the first week of real spring sunshine this year. Over 580 people registered to run or walk from Gibsons to Sechelt, with over 100 of those opting to split the distance up as a relay team. Nearly $1800 was raised for the Sunshine Coast Food Bank.

The overall male and female winners came from opposite ends of the age spectrum, with 48-year old Kevin O'Connor of Vancouver crossing the line first in 1:12:31, and Lethbridge's Adrienne Gomes, only 19 years of age, taking the win in 1:25:22. 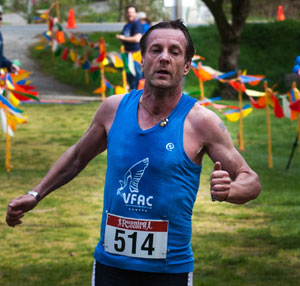 O'Connor, who has run the Fool's Run numerous times, including a close second in 2014 and overall victory in 2011, returned to take the title for a second time, earning $300 for the win and an additional $150 as top master (40+). He was nearly 2 minutes ahead of his nearest rival, Nathan Barrett of North Vancouver, who is in the 30-39 age group. Drew Nicholson of Surrey rounded out the top three with a 1:15:37 clocking.

O'Connor didn't lead from the gun, though. “The race started off very gently,” he explained. “Drew [Nicholson] and Nathan [Barrett] led for 2km, going through the mile in a conservative 5:40. I just sat in, expecting to run with any lead group until about 8k.” Feeling that Nicholson might have been having an off day, O'Connor picked up the pace at 4k and gradually pulled away from both rivals. “I had no idea what pace I was running, but I wasn't worried as I knew it was a reasonable effort,” said O'Connor. “I didn't even feel too much effort on the notorious hills that usually come back to bite us in the latter stages.” He was happy with the overall time, not having to race 'full out', noting that it's rare these days to find himself in the position of leading or winning a race overall.

Gomes took much longer to assert her dominance in the women's race. In the first half, the diminutive Albertan hung back, keying off early leader Meredith MacGregor of Vancouver. At halfway Gomes was still a full 45 seconds back. But MacGregor started hurting after passing through Roberts Creek Village and starting to climb up Beach Ave, near 14km. Gomes quickly made up the gap and took the lead on the infamous Marlene Road hill. Along the final highway section, she picked off the men ahead of her one by one, moving up to finish in 11th place overall. “It would have been fun to watch if I hadn't been in so much pain!” noted MacGregor. Taking third overall was Squamish's Margreet Dietz in 1:30:54, which netted her the women's masters win – moving up from second in 2015.

The most hotly contested division was the 4-Person Relay. Two local male teams, composed of 14-16 year old teens, battled all the way to the finish line, coming down to a nail-biting sprint to the wire just like last year's overall race between Shaun Stephens-Whale and Takanori Haraguchi. The relay rivalry was intense as their final runners tore down the finish chute, but in a photo finish the coast-wide “Thunderbirds” team prevailed over Sechelt's “Turbo Molasses”, both recording 1:28:23. The difference between winning and losing was highlighted as the Thunderbirds team members celebrated exuberantly, while the Turbo Molasses's final runner flopped onto his back, completely spent.

The 2-person relay division was won in a much more relaxed fashion, with Jennifer and Ryan Champman of “Lamchaps” crossing the line six minutes clear of the next duo.

Top local finishers and winners of Brooks shoes were Blair Hurlbut (1:32:03) and Katherine McGillivray (1:36:02), both of Roberts Creek. McGillivray was the second local finisher overall, lopping off nearly 4 minutes from her 2015 result.

In the Group Challenge, where the fastest 4 individual half marathon times from teams of 5 or more are averaged, VFAC took the Running Club and overall win as usual, averaging 1:23:03. Second overall group was the District of Sechelt in 1:54:33, winning the “Business” category with 8 members representing the district. The District of Sechelt really got into the spirit of the race, with a couple of relay teams also running, and everyone wearing matching team shirts. They plan to return in 2017 — will the Town of Gibsons challenge them? The Recreational division was won by Lauff With Me for the second year in a row — the biggest group with 9 members. 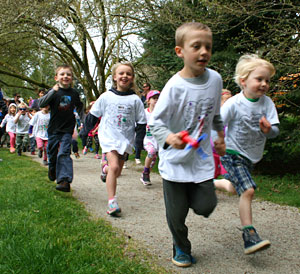 The free Sunshine Care Network Kids Jester Dash, presented by Pastimes, was the most successful edition yet. As usual, all 50 spaces filled up prior to race day. Families arrived early to take advantage of the activity tent where the youngsters had plenty of time to colour their special t-shirts before the run. Due to a sizing mix-up that was corrected by the t-shirt supplier, an extra 15 toddler-sized t-shirts were available to families who showed up hoping for last minute cancellations — and they were all handed out. Lots of smiling faces were seen dashing around the park and across the finish line to receive a finisher's medal just like the adults.

Perhaps the biggest winner of the day was the Sunshine Coast Food Bank. A total of $1792, nearly double the 2015 amount, was donated by participants during online registration for the half marathon, relay, and Jester Dash, and a box of food and personal care items was collected on site. That's very generous considering three quarters of the participants come from off-coast.

Full 2016 results and photos are available at www.foolsrun.com.

A special celebration is being planned for the 2017 Fool's Run, which will be the 40th Anniversary Edition. Online registration is already open and eager participants have already begun signing up a year in advance. The first 100 registrants get the “Super Saver Rate” of just $25 or less. Visit the website to sign up, or call 604-885-8849 to find out how to join the organizing team. 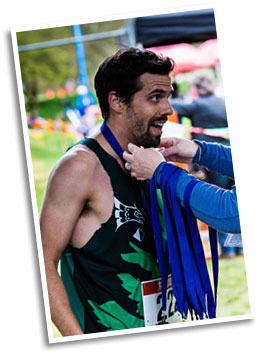