Leo Lam took individual pictures of many AFR participants. Look for your photos here (on FB) | and here (for ordering). 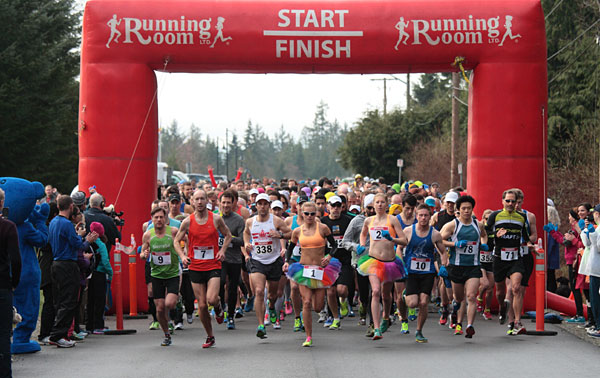 April 7, 2014, Gibsons, BC — Perfect conditions on Sunday resulted in a record breaking day at the 37th Sunshine Coast April Fool's Run, presented by Coast Cable. After an exciting and intensely fought battle for the majority of the course, Abbotsford's David Jackson edged out Vancouver's Kevin O'Connor for a 3-second victory in 1:09:09, in the process pulling O'Connor well under the Canadian Masters 45-49 age group half marathon best of 1:10. Though the Fool's Run is not eligible for official records due to its point to point route and net downhill, the big hills in the second half make it a challenging test of race fitness nonetheless, and bodes well for O'Connor's goal to set a new Canadian M45-49 record at the Sun Run.

The women's race was clear-cut but no less exciting. Wildly exceeding all pre-race expectations, Gibsons' own Kimberley Doerksen not only smashed the women's event record by over 3 minutes, but she did it wearing a rainbow tutu costume, in true Fool's Run spirit. Her 1:14:53 placed her fifth overall in the field. 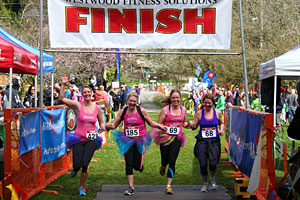 A great time was had by many (photo by Leo Lam)

After spring rains poured themselves out on Saturday, race day dawned dry and calm and mild, with a high of 12 and partial sunshine expected — ideal for racing. Over 625 participants were registered by the time the main group set off at 9:17 on Park Road, 1 hour after the walkers' early start.

“It was a perfect day for running,” said Pat Dejong, Regional Vice President, BMO Bank of Montreal. “I found the hills challenging but I was inspired along the route by the well-wishers. And there was such great energy and a warm welcome at the finish line — from cheering spectators and BMO the Bear!” 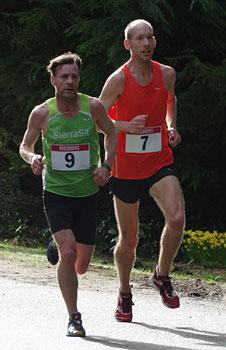 Jackson and O'Connor shot to the front of the pack immediately, separated from the masses by the time they turned the corner onto Reed Road, barely 200m into the race. “Dave and I went through the slightly downhill 1st mile in 5:07, then we maintained a healthy pace — neither of us wore a watch,” said O'Connor. “The only split we had was at half way in 34:12 — then I knew we were on for a good time if we could hold it. We shared the lead for most of the race but didn't communicate at all — just trying to maintain the pace, me for the time, Dave for the win.”

Jackson attempted to break away at 10k but he couldn't drop O'Connor. He tried again on the tough Marlene Road climb. “I felt very comfortable throughout the race and it was going as planned (staying with Kevin) but after I pulled away a bit on the uphill around 15-16km my legs didn't respond well and I was struggling a bit,” said Jackson. “When Kevin caught me around 17-18k he quickly went by on the big downhill and got about 20 metres ahead of me.” Jackson rallied back, though, and managed to close the gap by the 20k mark.

With 500m to go, Jackson made his move, taking the lead for the final time. O'Connor didn't let up one bit. “We turned the corner with only 50m left and although it was over I sprinted to squeeze every second out of the 1:10:00 over-45 Canadian record,” said O'Connor. He went under by nearly a minute, finishing in 1:09:12 to Jackson's 1:09:09. “I was really impressed with how strong Kevin ran and his effort allowed us both to run to the time we achieved,” Jackson said.

Third place went to up and coming Vancouver Falcons member Bryan Andrews in 1:14:20. 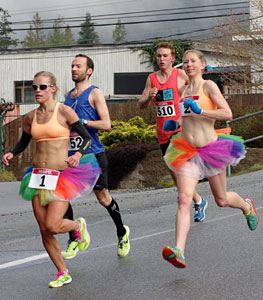 Doerksen was in a class all her own from very early on the course. Dressed in matching rainbow tutus and bright orange racing tops, she and 2-time defending champ Lisa Brooking of White Rock made quite a splash on the start line. The pair ran together for the first couple of kilometres before Doerksen left her costume twin behind. Soon she was settled in with the men's secondary chase pack, inexorably pulling away from the rest of the women's field. “The race felt like one of those 'everything fell into place' kind of days — the sun was shining, the spectators were cheering, my body felt good and I was at home on my old stomping ground. It was like being back in my early training days on a course I would do long runs with my Dad every weekend,” said Doerksen.

Eventually she dropped all of her male compatriots and forged ahead in fifth position, racing strongly over the second half of the course for a huge personal best and event record. “Going into it the thought of getting a personal best and potentially breaking the course record were both in my head — but I had NO idea it would be a sub-75… I feel like I'm on Cloud 9 and my face hurts from smiling so much!” she admitted. “I love this race, even though I don't like the hills very much, and am so happy to have set a personal best at home.” 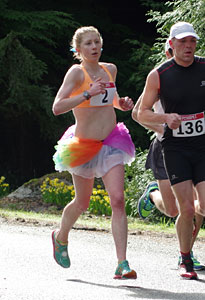 It's extremely rare for elite runners to dress up in costume while racing because it might slow them down, so why did she do it? “The costumes Lisa Brooking and I wore were a way for us to show that elites can take a race seriously but have fun at the same time — we felt of any of the races, the Fool's Run would be the most accepting of our tutu wearing so we had to take advantage of it. It was so much fun to get into the spirit of the event!” explained Doerksen.

The other women's podium positions were not decided until late in the race. Brooking initially went out with Doerksen, with Vancouver's Anne-Marie Madden keeping them both in range. Meanwhile, champion ultra marathoner Ellie Greenwood of North Vancouver was perfectly content to let them go ahead, preferring to start relatively slowly as she often does in long events. “Around halfway I began to see Anne-Marie reeling Lisa in ahead of me, and I was gaining on them both,” said Greenwood. “Around the 12km mark I passed Lisa [Brooking], then around 14km as we began the long uphill section I made a move to pass Anne-Marie [Madden].” Madden stuck close for a short while but once they hit the big downhill towards Jack Road, Greenwood was in her element and powered ahead for a solid second place win. Madden remained steady to claim third. 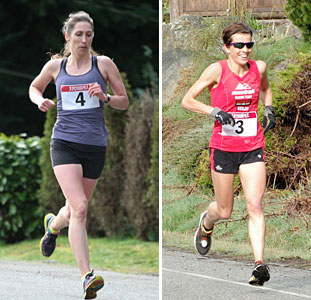 “I had no idea I got a personal best until I crossed the finish line, and I am delighted with my performance which is 45 seconds faster than the 'First Half' back in February”, said Greenwood. “This race was really well organised, there were lots of volunteers on course to keep us safe, and there was a really friendly vibe to the whole day.”

With top women's master seed Helen Ritchie a late scratch, the 40+ title was up for grabs. Margreet Dietz of Squamish made short work of the competition with a 1:27:05 clocking, a full two minutes ahead of second place Janette Purdham of Vancouver and nearly 2 more minutes ahead of Karen Warrendorf, also of Vancouver.

Ten minutes behind O'Connor's near-record-setting pace, the second place men's masters' position was claimed by Ashley McMillan of Whistler, with Darbara Ghuman of Surrey following in 1:22:16.

Top local on the men's side was Mason Gregory of Roberts Creek, who won the title last time he did the Fool's Run in 2011. Mason and Doerksen will get their names engraved on the George Matthews Memorial Trophy, and each received a pair of Brooks shoes. 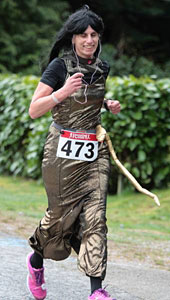 First overall and 4-person relay in 1:27:52 was “Punjab Running Club 3” from Surrey, part of a large contingent of PRC members who travelled over to take part on Sunday. Top 2-person relay team was “Will Run For Wine” from Langley.

The club/team challenge overall and club division was handily won by the Vancouver Falcons (VFAC) averaging 1:17:03 among the top 5 finishers. Team BMO topped the Corporate division and “Lauff with Me” took the recreational title.

Winner of the costume contest, by audience applause, was 'Cleopatra' (Judy Westacott) who edged out Troll Dolls, The Gingerbread Man, Kim & Lisa in tutus, and Bat Girls.

The finish area in Mission Point Park was the venue for the free Sunshine Care Network Kids Jester Dash presented by Pastimes. At noon nearly 50 children aged 7 and under, sporting race bibs they decorated themselves in the hour preceding, enthusiastically sprinted around the 400m loop on the park paths and into the official finish line. After the run each child was excited to receive a specially printed bag with a toy from Pastimes and a coin bank from BMO.

Full results, photos and video are posted at www.foolsrun.com. Next year's race date will be April 12, 2015. 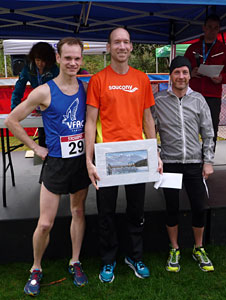 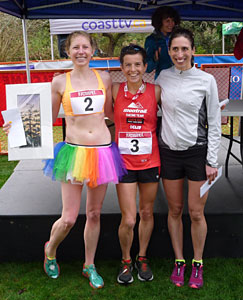 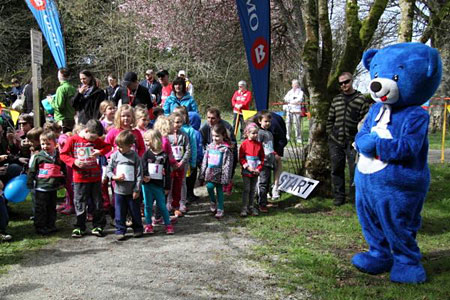 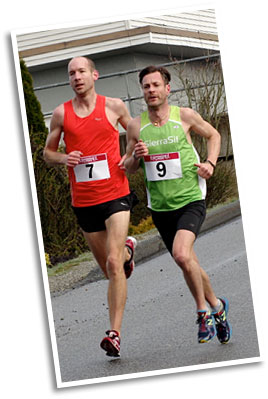 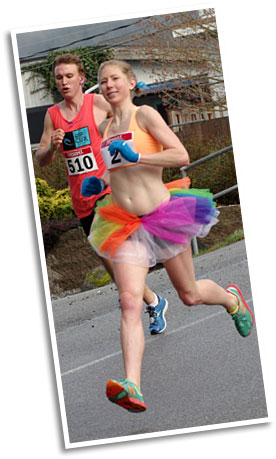