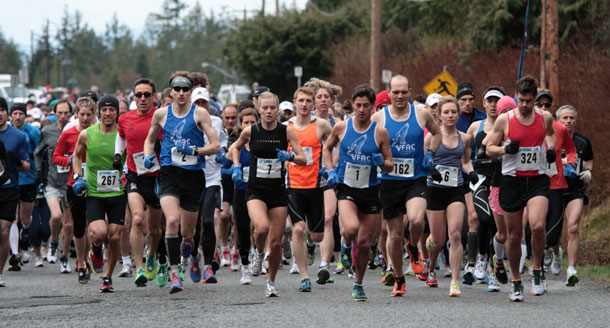 April 1st, 2012, Gibsons BC — Race organizers, volunteers and runners in the Sunshine Coast April Fool's Run felt like the victims of an April Fool's Day prank on Sunday morning when they awoke to an unseasonably late snowfall. But what started out as a wintery day turned into the nicest day yet in 2012 with warm sunshine to greet the racers at the finish in Davis Bay.

A flurry of last minute sign-ups brought the registration total to 585, the third highest turnout in the history of the race. The BMO Bear mascot was on hand along with race announcer David Jackson to send the main group off shortly after 9:00am on Park Road, 1 hour after the walkers. 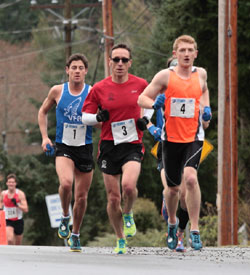 Heading through the first few kilometres, the lead pack soon emerged, including David Palermo of Vancouver, Graeme Wilson of Vancouver, Drew Nicholson of Surrey and Shaun Stephens-Whale of Roberts Creek.

The four of them cruised through the first 5k with Wilson mostly setting the pace. Shortly after the first aid station Wilson revealed that he was treating the race as a 'hard tempo' in preparation for the BMO Vancouver Marathon, and would be running the first half conservatively. “He told me to run my own race. I was a little stunned to hear his race plans up front and saw the open window,” said Palermo, who promptly took off as fast as he could, figuring that an early surge might be his only chance to win.

Stephens-Whale was tempted to follow but chose to stay with Wilson. “I was afraid that I was already stretching my fitness”, he said.

Stephens-Whale did move ahead of Wilson for a while, but by 13km they were once again side by side, Wilson assuring the younger runner they could resume contact with Palermo. However, Palermo continued to pull away, feeling great and extending his lead to nearly a minute.

Palermo was thrilled with his victory, pumping his fist with exuberance as he crossed the line. “Finally!” he exclaimed. “It's only taken me 4 years!” His winning time of 1:10:57 is a new personal best, hinting at good things to come in the BMO Vancouver Marathon on May 6th.

Stephens-Whale had to call on his strength training to carry him through the hilly second half, maintaining contact with Wilson to finish third, just 16 seconds back in a personal best 1:12:10.

Wilson pocketed an extra $100 for being first 40+ Master. Second and third masters prizes were claimed by 51-year-old Mark Bennett of Vancouver (4th overall, 1:14:06) and Mike Palichuk of Langley. 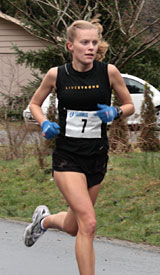 The women's race unfolded mostly as expected, with Langley's Lisa Brooking settling into first place early and holding on to take the women's title in 1:21:56 — her first half-marathon win. “The course was more challenging than I expected, especially in the second half,” said Brooking. “Without seeing Kristin [Smart] or Gillian [Clayton] at all during the race, I figured they were close behind and gaining.”

She was right about that. Smart had started dangerously fast, clocking personal bests at the 5k and 10k marks, then paying the price on the climb from Beach up to the highway — but was revived at 17k by the realization that she was slowly catching Brooking. With encouragement from a VFAC teammate, Smart was able to dig deeper in the final km and quickly close the gap for a 2-second PB. “Another 200m and I'd have had her I'm sure!” said Smart, who is also preparing for the BMO Vancouver Marathon.

Vancouver-based triathlete Clayton took the last podium position, a minute behind Smart with no one separating them. She was just happy to be racing after a recent ankle sprain, and pleased with the result despite missing a personal best by a few seconds.

The outcome of the top local women's race was a surprise, as Meghan Molnar outran fellow Gibsonite and defending champ Kimberley Doerksen by 40 seconds to record a 2-minute personal best of 1:27:02. She could hardly believe it and had to be convinced at the awards ceremony that she had indeed won.

Henry Donkers, Vice President, Vancouver Suburban District for BMO Bank of Montreal, led Team BMO in a speedy 1:33:25. Speaking at the awards ceremony he told the crowd how much he enjoyed the event and is looking forward to BMO's continued partnership with the Fool's Run.

The Club/Team challenge was won again by the Vancouver Falcons in the men's division, with Lions Gate Road Runners taking the mixed team title. 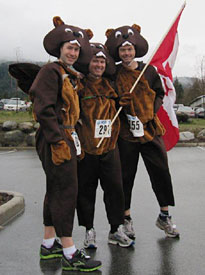 Back again as first overall and 80+ relay team was “The Young and the Restless”, a 2-person team from Richmond, with West Vancouver's “Cortar El Queque” taking the under-80 title. The 4-person division was won by “Cull-Men” from Gibsons in the 100-199 age group, and the “Half Fast Runners” from Gibsons in the 200+ section.

The costume contest prize (head-to-toe running gear from Impact Magazine) was awarded to relay runner Josh Workman, who sported a wig, headband and brightly coloured patterned tights. There were other costumes in the race that may have won, such as a trio of Canadian beavers in full furry attire, but they never showed up at the judging ceremony. They will be sent runner-up prizes!

Winner of the Grand Prize Draw for a weekend getaway at Painted Boat Resort Spa & Marina was local entrant Heather Damsgaard, who was thrilled to receive the prize at the awards ceremony. 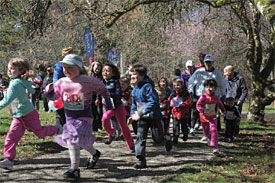 The inaugural Pastimes Kids' Jester Dash for kids 7 & under was very popular, filling up before event day at 25 entrants. Hosted by Sunshine Coast Nannies, the children coloured and decorated their own bib numbers, then raced around the park and into the finish line to receive a toy from Pastimes, a cookie, BMO bear coin bank, and a “Live Life” hat from Mary Kenny in honour of her late son Thomas Bennett. Entry to the Jester Dash was free.

The new finish line in Mission Point Park and hot food were received enthusiastically. Rachel Kiers of Vancouver commented, “I believe that was my 4th time participating in your Fool's Run and I plan to return. Coming from Vancouver, the ferry, the scenery, the post-race park on the beach, the shuttle bus, the relaxed atmosphere, the tomato soup, the unexpected sunshine, oysters and beer post race at the Gibsons marina, a chance to test your early season fitness... These are the things that no other race can offer and keep me, at least, coming back for more.”

Donations to the Sunshine Coast Food Bank were accepted at package pickup and after the run, with a total of 3 full boxes of food and some cash gratefully collected by food bank volunteers. “Thanks for all you do to make this such a successful event. It is a boost to the community,” said Dale Sankey of the SC Food Bank.

Full results and photos can be viewed at www.foolsrun.com/results.htm. A 30 minute video show produced by Coast TV will be aired starting April 22nd. 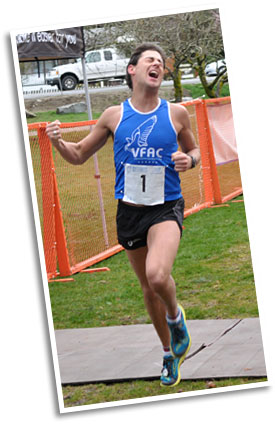 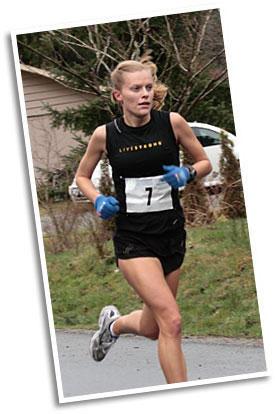