BC Championships: O'Connor and Sherbino, BC Half Marathon Champions

Rick Horne of VFAC took many photos for the club: View here.

Rick Horne of VFAC kindly took and posted video of the finish line up to 1:55:30. View here »

April 3, 2011 — Vancouver's Kevin O'Connor came through with a solid victory and a sub-1:10 clocking, while Kelowna's Keddi-Anne Sherbino took nearly 30 seconds off the previous women's event record, at this year's Sunshine Coast April Fool's Run presented by Coast Cable. A record 640 runners and walkers signed up for the half marathon and relay, up from 601 last year. The weather cooperated as the rain held off all morning and the wind blew the runners towards the finish.

Both O'Connor and Sherbino were also crowned the BC Half Marathon Champions for 2011, pocketing an extra $200 from BC Athletics — bringing their total winnings to $500 each, plus an extra $50 to O'Connor for being top master (40+).

O'Connor wasn't sure he should do this race, with the Sun Run just two weeks away, but with some encouragement from the race directors and Vancouver Falcons Athletic Club (VFAC) team-mates, decided to go for it. “I knew I was in good shape after a great Thursday workout on the trails,” he said.

Also gunning for a top podium spot was fellow club member David Palermo, fourth here last year. In the previous three weeks he had set three new personal bests over 5k and 8k distances and was determined to stay with O'Connor, or ‘Gramps’ as he's affectionately known among younger VFAC members, as long as possible. Rounding out the challengers was Geoff Reid in his debut half marathon, another young VFAC member Drew Nicholson, and triathlete Ynuk Bosse. 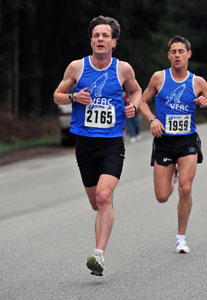 “I knew Dave and Drew would probably go out fast, so I decided to sit in behind them,” said O'Connor. “I figured Geoff Reid would sit in as well as Ynuk Bosse.” The first mile was a comfortable 5:15, with Nicholson leading the pack. Then ‘Gramps’ decided to test the younger competition with a couple of 200m surges. By the 5k mark he'd dropped them all except the very determined Palermo, who despite his best efforts could not prevent a gap from slowly increasing as O'Connor powered ahead. “I just cranked it up as I was feeling good,” said O'Connor.

He never once looked back or even at his watch, the only concrete feedback being at the halfway mark where his coach John Hill shouted out a 34:20 split, along with a caution that he should expect to slow down in the hillier second half. But he didn't slow down by much. “I was totally surprised with my finishing time as I didn't think it was that close to 1:10” admitted O'Connor. “With 100m to go I sprinted in as I wanted to beat my 1:10:17 from last year's Scotiabank Vancouver Half.” His final time was 1:09:59 — one of only five sub-1:10 clockings in Fool's Run history.

In the meantime, Palermo was working hard up and down the hills in a solo effort which paid off with yet another personal best of 1:11:30 and second place in both the BC Championships and the Fools Run. He was very appreciative of the course and volunteers. “I love not having to wonder where I am going when racing hard out there,” he said afterwards. “Thanks to all the locals who support athletes like myself and are courteous to all runners out on course.”

Of note in 6th place overall was 50-54 masters competitor Mark Bennett who clocked an exceptional 1:14:36. 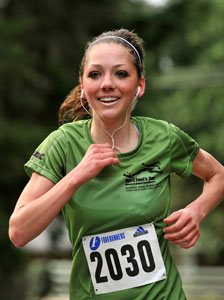 On paper, the women's race looked to be a close match between Sherbino, Amy Schneeberg, Gillian Clayton and Tina Connelly, but relative newcomer Sherbino left the others far behind with a huge personal best of 1:18:03 — 3 minutes and 37 seconds faster than her win just last weekend at the Okanagan College Half Marathon and nearly 30 seconds under the previous women's event record for the Fools Run (1:18:31), held since 2008 by Suzanne Evans of New Westminster.

Sherbino was thrilled with her result. “My race time exceeded my expectations. I have been hoping to break 1:20 but wasn't sure if this would be the race I would do it,” she said. “I honestly had all odds against me; a fall on March 25th left me with extremely bruised ribs — I spent the last week at physio and chiro trying to rehabilitate.” The half marathon she ran on March 27th aggravated the injury. “With all these factors at hand, I was elated crossing the finish line at the April Fools Run with a time of 1:18:03.”

Sherbino added, “I pushed in a new way at the April Fools Run and it brought about a new realization: running has become more to me than just a fun, leisure hobby—it is something I am made to do!” Certainly no one is going to dispute that.

Schneeberg and Clayton started together and ran comfortably through the first 7km in Gibsons, letting a few fast starters burn themselves out over the early downhills. As they headed down Lower Road into Roberts Creek, Schneeberg pulled away down Cemetery Hill, moving through the field for a solid second place finish in 1:22:56, a nearly identical time to her last half marathon in November 2009.

Clayton kept pushing through despite not feeling her best, after having her sleep interrupted in her camper van by some rowdy partiers. At the top of the Marlene Road hill she could see VFAC's Kristin Smart and Connelly ahead of her and started reeling them in. She passed Smart on the big downhill then set her sights on Connelly, moving into third place in the final kilometre and opening up a 16 second gap by the finish line. “I ran a hard km and then looked back just before going over the bridge and there was no one on my shoulder — phew! “ said Clayton. “That did not slow me down though as I still was running with enough fear to stay in top gear all the way to the line.” Right behind her, Connelly claimed the masters women's title in 1:24:36. 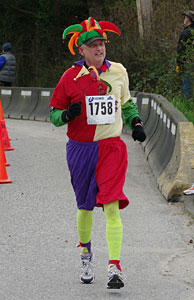 First Sunshine Coast finishers and winners of the George Matthews Memorial Award were 18-year-old Mason Gregory of Roberts Creek in a speedy 1:20:24, and multiple winner Kimberley Doerksen (20) of Gibsons in a personal best 1:27:53. That time qualified SFU student Doerksen for the NAIA Outdoor Track and Field Nationals in Indiana at the end of May.

Full results and photos can be found at www.foolsrun.com. Next year's race will fall on April 1st, 2012, and will be the 35th anniversary edition, so will include some special features in celebration — get your jester costumes ready! 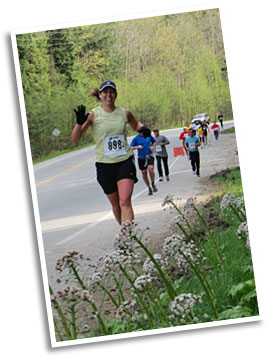