Coast TV provided coverage of the 2010 Fools Run. The host/commentator was Duane Burnett. 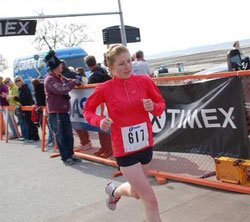 Sunday's 33rd annual April Fool's Run drew record numbers from the Sunshine Coast, the Lower Mainland and around the world to run what is considered one of the most beautiful yet challenging half marathon courses in the province. The race drew a largest-ever 537 runners.

Top finish went to Squamish's Jason Loutitt. Loutitt crossed the line at 1:11:21. Loutitt took second place in the 2008 Fool's Run with a time of 1:07 flat. After finishing the race, his breath barely heavier than an average person's at rest, Loutitt said he was pleased with the win, even if his performance wasn't where he wanted it to be.

“My time was really slow. I was a little bit sick coming into this,” he said.

Loutitt said the event's organizers, the course and the character of the Sunshine Coast make the Fool's Run a hit with marathoners.

“They do a great job. I've run races around the world, but when you see people come out of their houses to cheer you on, even when you're the first guy ahead of a big pack, you know it's a great neighbourhood,” he said. “I ran it two years ago, but you know what? You can't really remember those hills until you're back on them. Today I was on my own going 'wow, this is a good course'.”

The top runner in the women's category was Katrina Driver of Vancouver, finishing in 1:21:52.

“I love it. I think it's a really great course and I find it's really nice to have the downhills. It's a good race that's run really well,” she said.

The top local finish came from Fool's Run veteran Owen Coombes, who crossed the line at 1:25:34.

“I felt very good. I was hoping to PB [personal best] today, but I was really happy. I did better than last year and it felt good,” Coombes said.

But unlike other runners who take part in the Fools' Run, Coombes keeps his half-marathon talent on the Coast.

“This is the one for the year and that's it. Cold turkey after this,” he said.

The top local female finish came from Gibsons' Kimberley Doerksen, who also was able to post a PB at 1:36:21.

“The race was good. My performance was good. My hamstrings are a bit sore, but I can't really complain. It's a hard course, so I thought I did well seeing as how I got a PB,” she said.

Teresa Nightingale, who organizes the race along with her husband Larry, said this year's event went off like Murphy's Law in reverse — anything that can go right, did.

“Everyone has great things to say,” Teresa said after reading some feedback e-mails from the runners. “They all had great races. They loved it. We had a record turnout, no major problems, enough food, enough water. Everything went super well. Everyone's happy.”

Part of the reason for the event's success over the last 33 years, Teresa said, is the quality and commitment of the volunteers who help stage the race.

“Our volunteers get better every year,” she said. “A lot of the runners comment how great the volunteers are. They're just so helpful and so positive and everyone's enjoying themselves and that really makes it a great experience for the runners.”

And with a name like Fools' Run, one can expect some racers to be bringing an energy drink potency of fun to the race. Tim Adkins of Vancouver ran the entire 25.1 kilometres wearing a Darth Vader mask and cape. After finishing the race with an impressive time of 1:35:38, Adkins stayed in character to comment on how running the race in a mask affected his performance.

“I nearly overheated my Jedi mind, but it's not too bad,” he said.

Loutitt and Montgomery, BC Half Marathon Champions

BC Championships report on BC Athletics Blog:

The Sunshine Coast lived up to its name as it hosted the 2010 BC Half Marathon Championship in conjunction with the April Fool's Run, hosted by Sunshine Coast Athletics. The pont-to-point course from Gibsons to Sechelt has a net downhill, but there are a number of uphills along the way to test the competitors. This suited Jason Loutitt (Prairie Inn Harriers Racing Team), a mountain running specialist, who finished second at this race two years ago. This year he was unchallenged, and ran out a clear winner in 1:11:21. Second place in the April Fool's Run went to an international entrant, who was consequently not eligible for the BC Championship. Matthew Laye from Copenhagen finished in 1:14:56. Second in the Championship, third place overall, and masters champion was Kevin O'Connor (Vancouver Falcons) in 1:15:39. Rounding out the Championship places was David Palermo (Vancouver Falcons) in 1:16:19.

Darcie Montgomery (Hershey Harriers) won the BC Championship, and was also the first masters finisher, in 1:24:52. The other Championship placings, which is restricted to Junior, Senior, and Masters members of BC Athletics, were Nicole Akeroyd (unattached) in 1:27:07, and Janette Purdham (Vancouver Falcons) in 1:29:50. For the first time the BC Championships awarded prize money to the top 3 eligible finishers.

The overall winner of the April Fool's Run, who was not eligible for the BC Championship, was Katrina Driver, in 1:21:52.

The half marathon saw over 400 finishers, with a further 100+ participants in the two and four person relays.

The half marathon was also race #4 in the Lower Mainland Road Race Series (www.lmrrs.com). 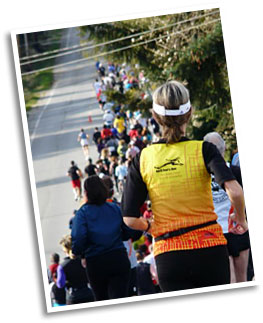