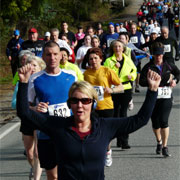 April 5, 2009 — The first real spring weather of 2009 coincided with the running of the 32nd Sunshine Coast April Fool's Run, to the delight of participants, volunteers and spectators. A record 537 people signed up to walk or run from Gibsons to Sechelt, as individuals and relay teams. 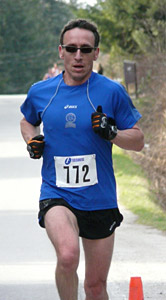 Wilson led the other two through the first mile, then as they crossed the highway at MarketPlace IGA and headed down Pratt Road, Wilson began to increase his lead and never looked back. But it wasn't an easy win. "Having not raced since July of last year, I kind of forgot how to really push it, and I'm glad I didn't" said Wilson. "But still, I thought I would be a little quicker! Even though I thought I was running a conservative first half of the race, it was apparent that I still ran too fast for my current fitness level, as I really struggled up the long hill [Marlene Rd] leading to the highway, and then things went downhill from there — literally/figuratively!" Wilson also said he always finds this course enjoyable and hopes to be a little faster next year, "like three to four minutes faster".

Bosse and Palermo stayed neck and neck for the first 4 or 5km, then Bosse made a move on the uphill portion heading back to the highway by way of King and Veterans. "David stayed on my heels up to 10 or 11k, before I really started to pull away from him" recalled Bosse. "I realized that I was not prepared for 21.1k yet. I really struggled (and probably slowed down) in the last 4 or 5k. But I'm happy with the outcome." 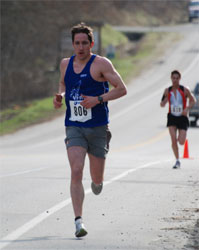 Though Palermo kept Bosse in his view for almost the entire second half, he was unable to close the gap. "There were a few times when I was feeling quite tired, but the cheers from all of the friendly onlookers were enough to ease the pain of those undulating hills," said Palermo. "I look forward to being right up there with Graeme and Ynuk next year. I really can't say enough good things, it was my best race experience ever."

On the women's side, masters competitor Helen Ritchie edged out Vancouver Falcons teammate Rebecca Reid by just 8 seconds to take the top women's open and masters prizes in 1:28:04 — good enough for 14th overall. Less than a minute behind Reid, Vancouver's Janette Purdham took the final cash award by an even smaller margin, just 6 seconds ahead of North Vancouver's Darcie Young. Demonstrating that getting older doesn't necessarily mean you can't win races, all five of the top women were in the 40-44 age division.

Ritchie got off to a fast start, taking an early 15 second lead on Reid and Purdham after the first kilometre. She was hoping to run in the 1:26 range after having run 1:26:25 in the Comox Valley half marathon two weeks ago. "Two weeks between half marathons is a bit short, but I wanted to come to the Sunshine Coast and do the run regardless" said Ritchie. "I figured the race was very good preparation for the Ottawa Marathon which I'm racing on May 24th. It'll be my first marathon since 1997."

Ritchie continued to lead, staying on pace and passing through half-way in 42:40, but in the later stages things got a bit rough. "I wasn't sure about my pace in the last 5 km because of the hills, but my splits show that I was fading fast!" said Ritchie. Meanwhile Purdham was helping Reid to maintain pace during the difficult middle miles. Ritchie remained ahead the whole time but on the final long downhill towards Wilson Creek, Reid began a hard drive to the finish, getting within 8 seconds of the leader but running out of pavement and opportunity before reaching the finish line. But there was no disappointment: "I was happy with my run, a PB [personal best] for me," said Reid. Ritchie knew she had a narrow escape: "If the race were half a km longer, Rebecca could have easily been the winner," she admitted.

Top male master and winner of an extra $50 cash was Mike Palichuk of Langley, finishing 4th overall in 1:21:09.

Sechelt's Owen Coombes was a repeat winner of the George Matthews Memorial Award for top local male finisher, slipping into the top 10 overall with a 1:27:26 clocking. After the arrival of his first child 5 months ago, Coombes had to cram in some last minute training to get to the start line, so he wasn't surprised that his time was a few minutes slower than last year. Wife and new mum Nadine also ran the half. 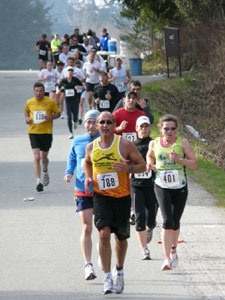 The George Matthews trophy will have a new name engraved on the women's side for 2009, in the form of Kimberley Doerksen of Gibsons, 9th overall female finisher and first in the women's 19&U division. Kimberley's time was 1:37:38, very good for an 18 year old. Both local winners also received a pair of New Balance shoes from Trail Bay Source for Sports.

Most age divisions were won by off-coasters with three exceptions: Kimberley Doerksen in the F19&U category, Roger Handling of Roberts Creek annihilating the M55-59 competition by more than 4 minutes, and Helen Sabourin of Gibsons in a class of her own in the F65-69 category, a whopping 18 minutes ahead of the next competitor.

A new category this year was the Club/Team challenge. This was an opportunity for groups or clubs to compete as a team, with the fastest 4 half marathon times combined to determine the winner (minimum 5 team members). The hands-down inaugural winner was Vancouver Falcons Athletic Club (VFAC) with an average time of 1:24:27.

In the relays, a local 2-person team called the "Driven Divas", made up of Crystal Spence and Janna Brown of Sechelt finished literally miles ahead of any other relay teams, clocking 1:32:59. First 4-person team was "The Happy Wanderers" from Langley, in 1:45:41, with members Shelley and Kevin Armitage, Sonja Vance, and Veronica Steiger. But the honour of best creative relay name might go to the "Flaming Snails" from Squamish, or perhaps "3 Hot Chicks Plus An Old Guy" from Sechelt.

Participants all agreed that the Gibsons & Area Community Centre was the perfect venue for packet pickup and late registration, both Saturday and Sunday, with plenty of parking, indoor space and washrooms, and close proximity to the start line on Park Road.

The new finish line at the beach parking lot was also very enthusiastically received, with plenty of space for a long finishing chute, spectator viewing areas, food tents, gear check and awards, all with a beautiful beach backdrop. A number of runners took advantage of the beachside location, enjoying a partial dip in the ocean to cool their leg muscles.

As a surprise bonus for fans of the show "Being Erica", runners received their finisher's medal from Sechelt-based actor Tyron Leitso ('Ethan'). This added to the festive atmosphere at the finish line, which included tunes from DJ Astrid and race announcing by Bruce "The IronCanuck" Bauman.

The April Fool's Run was event #3 of the Lower Mainland Road Race Series which continues on May 10th with the Mother's Day 5k Spring Classic in Port Moody, a family-friendly event. 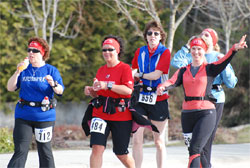 See you next year!
(Photo by Mike Pearson) 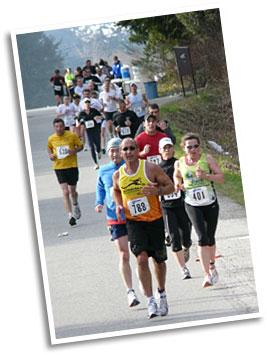