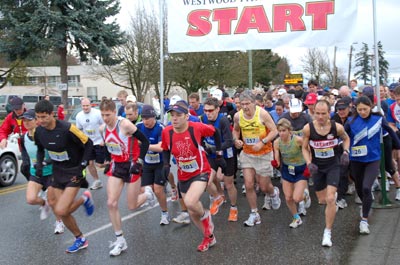 HALF MARATHON
Story and Photos by Ian Jacques/Editor

The record books were re-written in the men's and women's divisions at the 31st annual April Fool's Run last Sunday. The top three men all finished under the old mark of 1:09:58 set in 2004. 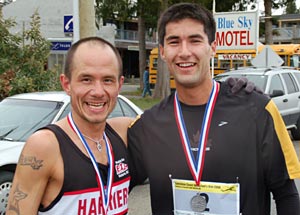 Ryan Day of Richmond blazed through the course, finishing in a time of 1:06:23. Fellow First Nations runner Jason Terouche-Loutitt of New Westminster finished second in 1:07 flat, and Mark Bomba of Coquitlam completed the trio in 1:08:44.

Although he's never competed in the event before, Day is no stranger to the Sunshine Coast, as his dad was born and raised in Gibsons.

"I've been meaning to get up here for quite a few years and run this event — I'm glad I finally did," Day said. "It was a fair course, but because of the hills, it's not easy by any means. The weather brought out pretty good conditions for long distance running. The event was very well run. I was impressed. I will definitely come back." 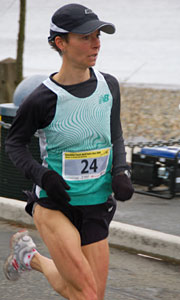 Evans, also a first time competitor at the event, said she was impressed by the organization, the volunteers and the course. "It feels pretty good to win this," Evans said. "It was the first time I've come up and it was great. I actually enjoyed the scenery. I know I wasn't supposed to, but it's beautiful. It was a good course and I will definitely come back. Overall the course was pretty fast and the rain held off, so all in all it was a good day."

Top local runner was Owen Coombes of Sechelt with a terrific run of 1:23:46, taking nearly four minutes off his 2007 time. Coombes broke the three-year streak held by Shaun Stephens-Whale, who was absent this year. Sechelt's Crystal Spence repeated her winning ways with a 1:35:09 finish to get her name added to the George Matthews Memorial Trophy for the fourth time.

First relay team to finish was Double Trouble from Richmond in a speedy 1:21:43.

A total of 533 registered entrants took part in the event, which was two up from last year.

Race director Teresa Nightingale said overall she was happy with the event. She said there were a few logistical problems, but those were solved pretty quickly thanks to good cell phone communication and the hard work of all the volunteers. She said there might be a few slight course alterations next year to better accommodate traffic flow in Davis Bay, parking and the post-race awards.

"It's nice to have some new winners and new athletes coming here and enjoying the course," Nightingale said. "The times were fantastic. It shows we have a pretty fast course. The weather could have been a bit better, but you can't control that.

Overall I think everyone had a positive experience, and we're looking forward to next year."

For more on the race, including race photos, check out www.foolsrun.com.

Gibsons BC — A record turnout of 533 registrants signed up for the 31st Sunshine Coast April Fool's Run, presented by Coast Cable Communications. The weather held up with only a sprinkle of rain at the finish, despite the forecast of rain all day. There was actually sunshine through Roberts Creek after a dry start in Gibsons. This year with the Davis Bay highway traffic detoured, the finish line was a festive affair with DJ Astrid and announcer Bruce Bauman keeping everyone entertained and informed as the runners arrived.

The event record was shattered with all of the top 3 men finishing well under the old mark of 1:09:58, set back in 2004. This year's winning time was a blazing 1:06:23 by Ryan Day of Richmond, a First Nations runner originally from Kitimat. Another First Nations runner, Jason Terouche-Loutitt of New Westminster, who moved to BC last year from Banff, crossed the line second in 1:07 flat, and Mark Bomba of Coquitlam completed the trio in 1:08:44.

On the women's side, Suzanne Evans of New Westminster shaved 1 second off the women's record set last year by Katrina Driver, finishing in 1:18:30. Coming in second was top masters runner Joan McGrath of New Westminster, in the 45-49 age group clocking 1:22:10, and Susanne Russell of Vancouver in 1:23:08.

Top masters male was Vancouver's Mark Bennett, 5th overall in a first-rate 1:17:15. Like first female master McGrath, Bennett is in the 45-49 age division. Another master Doug Alward of Port Coquitlam, in the 50-54 division, finished 6th overall in an excellent 1:18:24.

Among Sunshine Coast runners, Owen Coombes of Sechelt broke the 3-year streak held by Shaun Stephens-Whale, who was absent this year, with a terrific run of 1:23:46, taking nearly 4 minutes off his 2007 time. Sechelt's Crystal Spence repeated her winning ways with a 1:35:09 clocking to get her name added to the George Matthews Memorial Trophy for the fourth time.

First relay team to finish was the duo 'Double Trouble' from Richmond in a speedy 1:21:43. 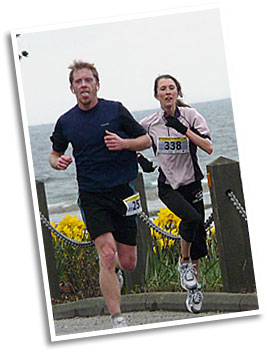