HALF MARATHON
Story and Photos by Ian Jacques/Editor 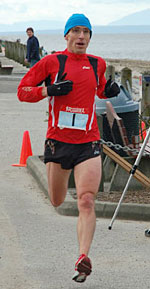 Vancouver runners Graeme Wilson and Katrina Driver repeated as men's and women's champions at the 30th edition of the April Fool's Half Marathon and Relay last Sunday. Wilson, who won last year's event in a time of 1:11:07, bettered his finish this year, crossing the finish line in Davis Bay at 1:10:45.

Wilson said he was happy to repeat and happy to return to the Coast for an event he looks forward to every year.

"It was a great run on such a nice course," Wilson said. "There was a bit of a headwind, which was a bit of a problem, but in the end it didn't matter. I overcame that and I'm very happy with my time."

Organizers Teresa and Larry Nightingale made a few changes to the course, most notably to the finish line in Davis Bay, rather than the previous year's finish at the Raven's Cry Theatre parking lot in Sechelt. The change meant a scenic finish beside the ocean with the mountains providing a stunning backdrop for competitors. Plus, runners also didn't have to contend with the monster hill in Selma Park—a fact that almost everyone polled by Coast Reporter was happy to not have to contend with this year.

"The changes are great. It's nice not to have to worry about the hill—it takes a lot out of you," said Wilson.

Driver put in a fantastic run, finishing the course in a time of 1:18:31, which is a new event record for female runners.

Her time was two minutes faster than her time last year (1:20:02, at that time an event record) and was also a personal best for her.

"I'm really happy. I really enjoyed it and I love the course," said Driver. "It's my personal best and I've been aiming for that for the last few years. The finish here in Davis Bay is beautiful and it's nice to not have that big hill at the end."

"The race started well and I was on pace for a good finish, but towards the end I felt really tired," said Shaun. "It wasn't a bad race; it just didn't end quite as well as I was hoping. The new course changes are great. I liked the finish. I wish I just could have put on a bit more of a show for you guys at the end, but I was just too tired."

Spence was thrilled when Coast Reporter informed her she was the top local female finisher.

"Great—finally," Spence said. "I was very happy with the run. The course changes are great, especially the finish.

Physiologically it's better because you don't have to worry about that big hill at the end. My time was a bit slower than last year. I wasn't feeling that well going into the race, so I didn't want to push it, but I had a nice pace throughout."

A total of 464 individuals took part in the race. There were 20 relay teams of two and seven relays of four, which brought the overall entry total to 531—up just slightly from last year in terms of total entrants.

"We're very happy with how everything went," said Teresa. "Dealing with a new route and new course arrangements was a lot of work, but from the feedback we've received already, everyone seems very pleased with the changes. We're already looking forward to next year."

The countdown clock, on the event website, is already counting down the days to the 2008 event, set for April 6. 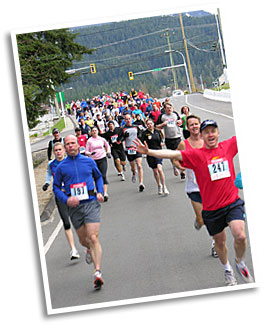