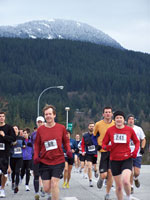 April 2, 2006, Sunshine Coast BC — Katrina Driver of Vancouver smashed the women's course record by 3 minutes at the 29th annual Sunshine Coast April Fool's Run on Sunday, April 2nd, presented by Coast Cable Communications Ltd. The overall race was won by Vancouver's Graeme Wilson who was second last year. Each picked up $300 for their efforts.

Driver's time of 1:20:02 was outstanding for the undulating point to point course. The previous women's record was set in 2005 by Cindy O'Krane. The hills were a welcome challenge for Driver, who has won a number of trail races in the past 2 years, and was first female at the 2001 Royal Victoria Marathon. 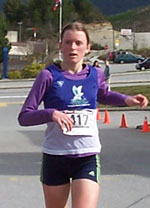 For most of the race Driver stuck with Coquitlam's Nancy Tinari—until the Davis Bay hill at 11 miles where Driver was finally able to pull ahead and lead to the finish. "I really enjoy the variation in the course and hill challenges," remarked Driver. "The course still manages to be fast and fun!"

Tinari finished in 1:20:41 after having to double back after running past the turn into the finish, losing about 10 seconds. Being second female and top female master (40+) earned her a cool $200. Taking third overall and $100 with another strong performance was Vancouver's Sheila Mullins (1:23:56).

On the men's side, Wilson's race was much more of a solo effort. "Kevin (O'Connor), Steve Mattina and I were running together for about the first three miles, and we were going at a pretty good clip," recalled Wilson. "Steve dropped back just before the three mile point, and Kevin dropped back shortly thereafter—and we were all on our own after that." 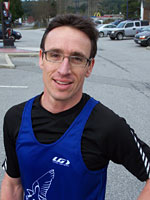 Coming to the race was a last-minute decision for Wilson, even though he enjoyed the event in 2005: "I have a newborn, so I felt a little guilty leaving the family unit for too long," he explained. It turned out to be the right decision, as he cut more than 3 minutes off his 2005 time. He attributes that to training with the Vancouver Falcons Athletic Club and coach John Hill since November. The warmer, drier weather with a tailwind this year helped too.

O'Connor had a tough time after going through the first 5k about 20 seconds faster than his most recent 5k race. He continued on at a slower pace for second overall in 1:14:49. "That was one of the hardest courses I've run, and I've run a few in my time!!" noted O'Connor. "The last half especially was tough." 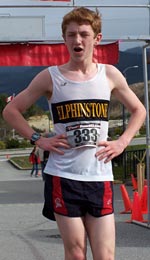 Roberts Creek teenager Shaun Stephens-Whale, age 16, was hoping to run under 1:20 this year, having won the George Matthews Memorial Award for first local finisher in 2005. He more than achieved his goal, knocking nearly 8 minutes off last year's time with a superb 1:18:26, good for 5th overall.

The first local woman was also ranked 5th overall. Melissa Braithwaite of Granthams, who has won the women's division outright in the past, earned top local honours this year by running 1:26:01. This put her over four minutes ahead of 2004 & 2005 local winner Crystal Spence, who beat her own personal best by nearly four minutes.

The top teams in both the 2-person and 4-person relays were from the Richmond Kajaks Track and Field Club—all masters runners. The first local relay team was made up of 4 enthusiastic Gibsons teens: "Team GOmez".

The Corporate Team Challenge was won by Howe Sound Pharmacy with 50% (5) of their employees going the distance in the walking division. 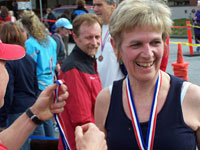 A total of 532 runners and walkers registered for the 2006 event, up slightly from last year's 509. The final vote is not yet in for the winner of the neighbourhood challenge, but all enjoyed the crowd support along the route this year, especially in Roberts Creek where Kiel and Talia Strang played their fiddles at Beach and Marlene, and in Davis Bay where spectators did a great job of encouraging the runners up the hill.

Next year's race will be the 30th anniversary on April 1st! 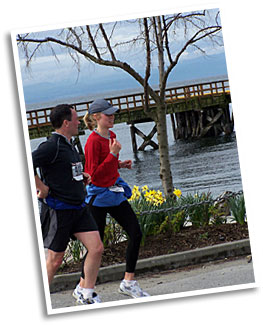