HALF MARATHON
By Ian Jacques/Editor

The bar has been raised at the April Fool's Run.

Kosgei finished in a time of 1:10:40, around 42 seconds slower than last year's top finisher.

"I think the weather had a lot to do with his finish," said race co-ordinator Teresa Nightingale. "I expected that he'd break the record, but it was wet and cold, so that probably contributed. It's still a great time and certainly helps to raise the profile of this event."

A total of 509 participants took part in the event, up slightly from last year's 487. See the overall results in the Sports Ticker on page C5. [webmaster's note: online results here]

Both runners were awarded with the George Matthews Memorial award for being the first local finishers.

Both had solid runs and took five minutes off their times from last year, said Nightingale.

"I think it's really something special to see two young people winning the memorial award," Nightingale said. "George was a teacher. I think he'd be proud to know that young people were receiving this award."

Nightingale said she was happy with how the event went and was pleased to report lots of positive feedback.

"Despite the really wet start, the rain stopped towards the end and the sun came out in the afternoon," she said. "The whole event ran smoothly. Everything went on time, all the volunteers did a fantastic job, and the racers all said they had fun competing. We can't wait for 2006!"

For more photos from the event and information, check out www.foolsrun.com.

Click on an image to browse gallery, click the X or escape key to close. Photos by Ian Jacques, Coast Reporter

Click on an image to browse gallery, click the X or escape key to close. Most photos by Marlene Lowden, Coast Cable 11 (taken from video footage) 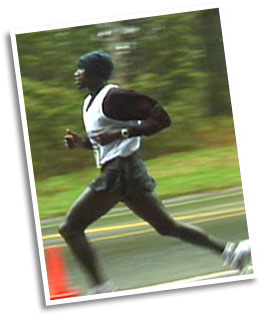