March 28, 2004, Gibsons BC — More than 430 individuals ran from Gibsons to Sechelt on Sunday morning in the 27th annual April Fool's Run Half-Marathon, with perfect spring weather conditions keeping spirits exceptionally high. After a few days of cold rain late in the week, race weekend brought sunshine and mild temperatures, much to the relief of organizers and participants.

The winner had the road all to himself right from the start. Victoria's Nik Southwell, a race morning sign-up, looked very focused as he blasted off the start and raced through Roberts Creek, Davis Bay and into Sechelt en route to victory and a new course record of 1:09:58. It was all part of a plan: a week earlier his partner had emailed the organizers inquiring about the course record.

Attired in a white shirt with black racing stripe, a "Breathe-Right Nasal Strip" perched on his nose to give him extra oxygen, the 29-year old looked incredibly light on his feet as he navigated the ups, downs and flat sections of the course. Over six minutes ahead of the rest of the field by the time he reached the Raven's Cry parking lot, Southwell made it look easy to average a 5:20 per mile pace.

With a triathlon background (6-time national team member), Southwell has been doing a variety of sports in the past year including grappling, extreme mountain biking, triathlon & duathlon. The April Fool's Run was only his fourth race in 2 1/2 years. "Who knows, it may be rock climbing next week!" he suggested. He decided to do the Fool's Run at the last minute, as he needed to get another hard workout for the week. Coming off a Road Runners of America National Championship marathon win three weeks ago in Napa Valley, Southwell knew his fitness should carry over from that race.

"The Fools half felt very comfortable," he said. After passing the 6 mile mark at 30:20 he felt it may have been a little quick, and he'd suffer a little bit the 2nd half—which he did, noting that one can only run uphill so fast. He concluded, "All in all I was glad to have made it out to my first Sunshine Coast trip, and will be back in the future. It was a pleasure to have run your scenic and challenging course, and to all those who want to make it out, be sure to make an extended weekend out of it, and enjoy the Sunshine Coast!"

Meanwhile, back in the rest of the race, a small pack was running together in second place through Roberts Creek: Robert Durrant of Langley, James Gardner of North Vancouver, Steve Mattina of Vancouver, and Gord Addison of Squamish, followed by Peter Haynes of Vancouver. Eventually Haynes would catch Addison. Durrant and Gardner pulled ahead of the others to finish 2nd and 3rd in 1:16:15 and 1:16:29 respectively.

In seventh place overall was Jim Gordon of Gibsons, the first local finisher and therefore male winner of the George Matthews Memorial Award, in an excellent 1:21:36.

The women's competition was won in a speedy 1:23:25 (10th overall) by Leslie Black of Vancouver, who has been victorious at the April Fool's Run a number of times in the past—in fact, every time she has raced it. The first time was in 1998, clocking 1:28:06 as 5th person overall. "That first year sold me on the run, as I had brought my mum with me while on her annual visit to BC and thought the Sunshine Coast sounded like a place she might enjoy," explained Black. "My mother enjoyed the local hospitality at its best: a family gave her free breakfast, lunch, tour and transport to watch the race and catch the ferry to boot! I was determined to go back to Vancouver and tell all my friends and club-mates about this fantastic 'Ma & Pa' event."

On race day this year, she barely squeezed onto the 7:20am ferry and quickly noted by seeing her fellow ferry travellers that this would in fact be a tough year to uphold her "wins-record". At the start line she told club-mate Shannon Hodge that she was going to run a smart race and start slow. Says Black, "Within the first mile I had already completely ignored my own sage advice and went out way too fast... gotta love that downhill start!" The support that she received all along the route helped her to simply have fun and give it her best. "It is the race volunteers and the extremely supportive spectators cheering that make this race a 'must-do' for all runners that truly love the running community at its best!" Her time this year was her fastest at the Fool's Run by 1 minute.

In second place, 2003 women's winner Rene McKibbin of Delta ran 1:27:44, nearly the same time as before, despite suffering from flu during the week. Third place was claimed by Vancouver's Shannon Hodge in 1:30:03, a couple of minutes off her 2003 second place time.

Hodge finished just behind the winning relay team with a great name "Lord of the Run"—Jared Barabash-Burnham and Wyatt Turney from Halfmoon Bay, clocking 1:29:34. Second place relay was another Halfmoon Bay team, "Jess & Mack" in 1:32:28, consisting of Jesse Horn and Mackenzie Mitson. First 4-person relay was the "Grunenberg Clan" with Ken and Perry Grunenberg, Lisa Rae and Linda Dandy sharing the distance in 1:37:21.

First local female and winner of the George Matthews Memorial award was Crystal Spence of Roberts Creek in 1:39:28, a great time for a 17 year old. She placed 14th among 201 female competitors.

The "Fool's Run" grew from 325 registrations in 2003 to 487 sign-ups in 2004, and with the great weather and warm welcome shown to the participants, is likely to grow even more for next year: April 3, 2005. Feedback from finishers has been overwhelmingly positive.

Check www.foolsrun.com for results, plus more photos by Duane Burnett—and watch Coast Cable for a half-hour show on the event. 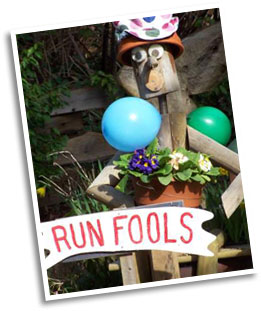