The weather played a bit of an April Fool's joke on the race participants. "Where's the sun?" they joked. "I thought this was the SUNshine Coast!"

Rain or shine, they came out in hordes to run from Gibsons to Sechelt. Fifty-six sign-ups on race day brought the total to 332 entrants—far beyond the original expectations of the organizers.

Among those entrants was overall winner David De Pasquale of Nanaimo, a 38-year-old chemical engineer who first ran this race back in 1986 when he was a co-op student at Waterloo University, working for Howe Sound Pulp & Paper. The 1986 race was his first half marathon—he'd only been running for a couple of years, originally to strengthen his knees after surgery.

De Pasquale is currently training for a May marathon and chose the April Fool's Run as a preparation race. He not only finished first, but got a personal record of 1:14:29, 37 seconds faster than his previous best. "My goal was just to break 1:15, I wasn't expecting to lead the race," noted De Pasquale. "I just stayed on pace and found myself out in front." In addition to the personal best he was rewarded with prizes for winning overall: a large hand-crafted mug from Creek Clayworks, a bandanna with a First Nations design from Tsain-Ko Gallery & Gifts and a running jacket from Trail Bay Source For Sports.

The same spoils went to overall women's winner Rene McKibbin, who didn't break any personal records but like David ran conservatively and beat her goal time. The former South African, now living in Delta and sponsored by the Running Room, was aiming for 1 hr 30 min, so was very pleased with her 1:27:30 result (her best is 1:25). McKibbin was using this race as preparation for the Boston Marathon, and thoroughly enjoyed the course from start to finish.

"I ran with Tina-Louise [Harris] for the first half," recalled McKibbin. Vancouver's Shannon Hodge passed McKibbin and Harris at about 6 miles and led by 100 metres for a while. Eventually McKibbin left a slightly slowing Harris and caught up to Hodge, staying with her until about 2 miles to go. Feeling great on the Davis Bay hill, the 35-year-old pulled away easily and built up a 35-second lead by the time she reached the Raven's Cry.

Second and third in the men's overall race behind De Pasquale were two Running Room sponsored athletes, Steve Mattina and Kenji Tano of Vancouver. They recorded the same finishing time of 1:17:46, with Mattina just a millimetre ahead.

First local finisher was Martin Hanning of Sechelt in 13th place and a time of 1:27:59. Hanning, along with top local female Noëlline Bellemare of Gibsons (1:44:46), will be the first to have their names engraved on the George Matthews Memorial Trophy, created this year in honour of the co-founder of the April Fool's Run. The trophy will be kept on display at Elphinstone Secondary throughout the year, where Matthews was head of the English Department.

At the awards ceremony and brunch at Johnny Oregano's following the race, category winners were awarded beautiful handcrafted mugs, and dozens of terrific draw prizes were given away. Especially popular were two pairs of New Balance shoes from Trail Bay Source For Sports; five overnight stays from local B&B's, some of which included extras like dinner and massage; and a heart rate monitor from The Medicine Shoppe in Wilson Creek.

About two-thirds of the participants came from off the Coast, many on their first visit to the area. They heard about the race through the internet, friends, Running Room clinics, race brochures, and on Mountain FM. With entrants from Switzerland, Germany and even Gambia (West Africa) the race took on an international flavour.

The great turn-out also helped raise $1400 for local high school track & field teams, which will enable them to compete more often in the Lower Mainland where track facilities exist.

The organizers wish to give a special thank-you to all the volunteers who did such a terrific job. See who they are, and the complete race results, at www.foolsrun.com. 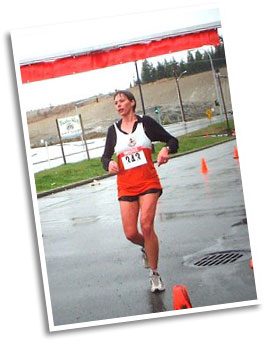