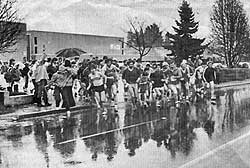 Despite the inclement weather of a cold and rainy March day sixty-three entrants started off from Elphinstone Secondary School in Gibsons on Sunday, March 29, on the Fourth Annual April Fool's Day Run between Gibsons and Sechelt. The run has attracted more entrants every year since its inception.

The first finisher this year was Steven Brindle of Vancouver who covered the run in one hour and thirteen minutes, almost fifteen minutes faster than the previous best time set by two-time winner Adrian Belshaw. Besides the Coast News Cup, winner Brindle received a Nike club bag.

Local man Raul Poole finished a close second in one hour and fifteen minutes followed by James Oostenbrink of Vancouver who came in one minute behind Poole. Poole was rewarded with Adidas TRX Trainers and Oostenbrink collected a Nike club bag.

The run this year featured recognition of various categories and Chris Craigen of Vancouver was the first woman to finish. She ran into Sechelt only one hour and thirty-four minutes after the start. Local businessman Arne Tveit-Pettersen was the first finisher in the Men's Master Class for men over forty. Arne finished in one hour forty-six minutes. Stephen Christian was the first finisher in the under fourteen category with a finishing time of one hour, forty minutes. These winners all received Nike T-shirts and jogging socks courtesy of Trail Bay Sports.

At least 10 of the sixty-three starters were from Vancouver and they were unanimous in their praise of the course and how much fun the event was, despite the rain. The Vancouver runners thought the event well-organized and found all the people associated with it most friendly and helpful.

In future, plans are for the April Fool's Day Run to be listed in the magazine B.C. Runner so more non-local runners will know about it. If it becomes a registered course, those wishing to participate in such runs as the Vancouver Marathon will be able to use their performance here as an official qualifying time.

A near dark spot in an otherwise pleasant event occurred just outside Sechelt when one runner was knocked into the ditch by a passing car. Wayne Newport recovered and was able to finish in fourth place. It is thought that Newport, despite race instructions, was cutting the corner on the wrong side of the road at the time of the incident.

The Coast News regrets that it did not receive finishing times for Bruce Pedersen, Brent Berry, Trevor Chambers and Freddy Williams.

Besides the record entry, the April Fool's Day Run this year featured a five-mile run starting at Browning Road. Taking part in this modified effort were Steven McLeod, Renee Fountain and Aron Bjornson. 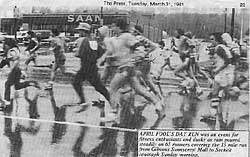 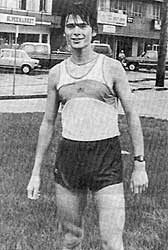 STEVEN BRINDLE of Vancouver flashes a pleased smile as winner of the 15 mile April Fool's Day Run which he completed in 1 hour, 13 minutes, beating last year's record by 14 minutes. 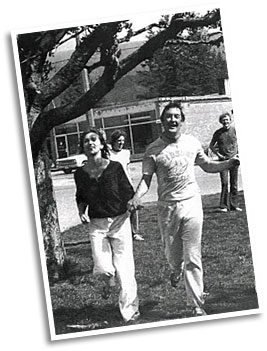 Voice from the past:

In October 2007 we were contacted by 1981 winner Steven Brindle who now lives in Florida! Here's what he emailed:

“My sister directed me to your website the other day. She told me that you had a photo of me when I won your race back in 1981. Sure enough there it was. I remember the race quite well and really enjoyed the race and the local hospitality. I also remember the 'rainy' sunshine coast. I'm glad to see the event is still being run.
“I now live in Orlando Florida and still run a bit. Perhaps I can get up in that area with the family to run and vacation. Best wishes to all that run the 2008 event.”
—Steven Brindle